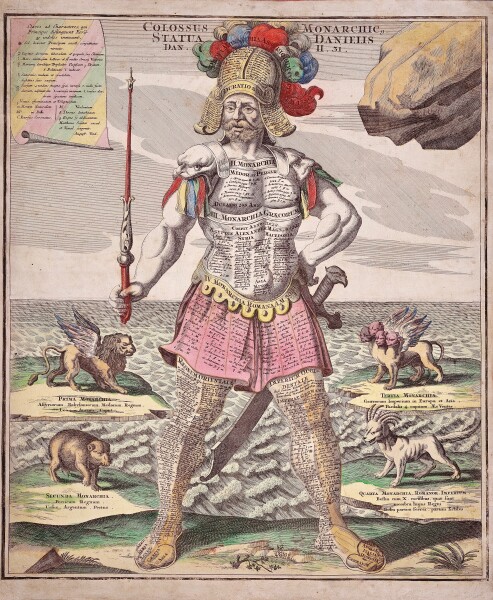 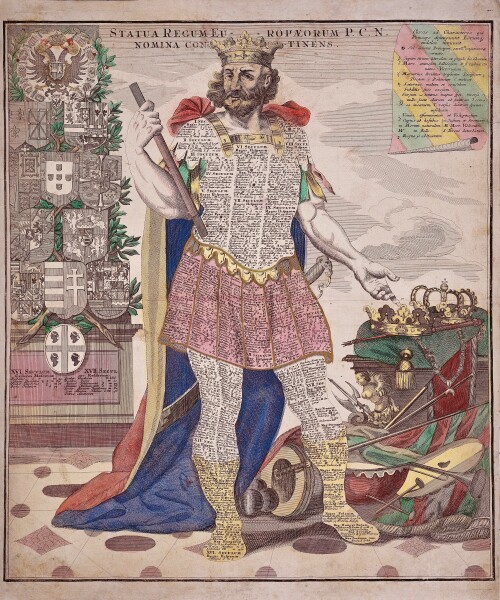 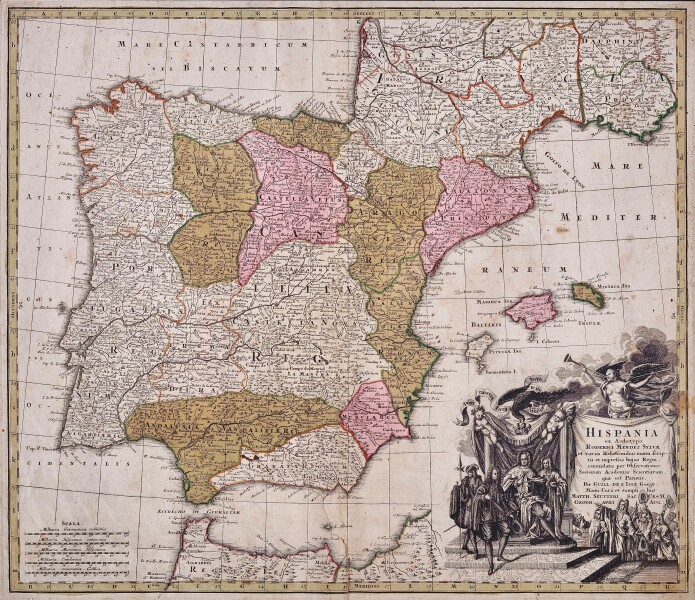 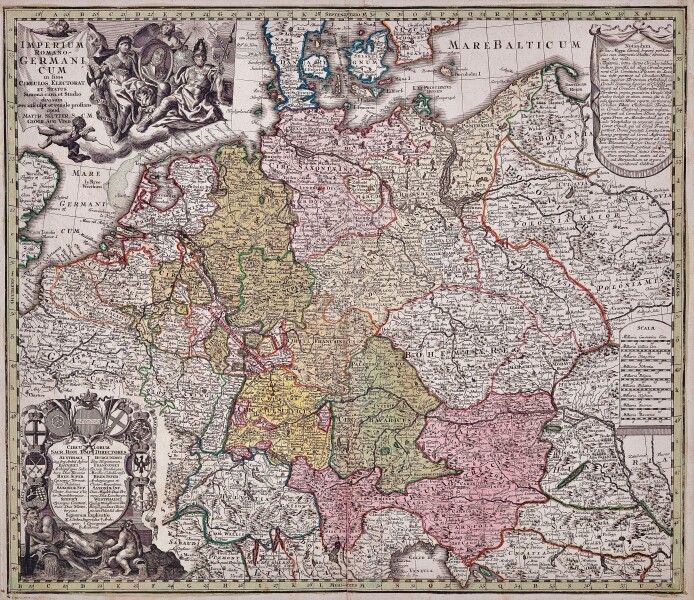 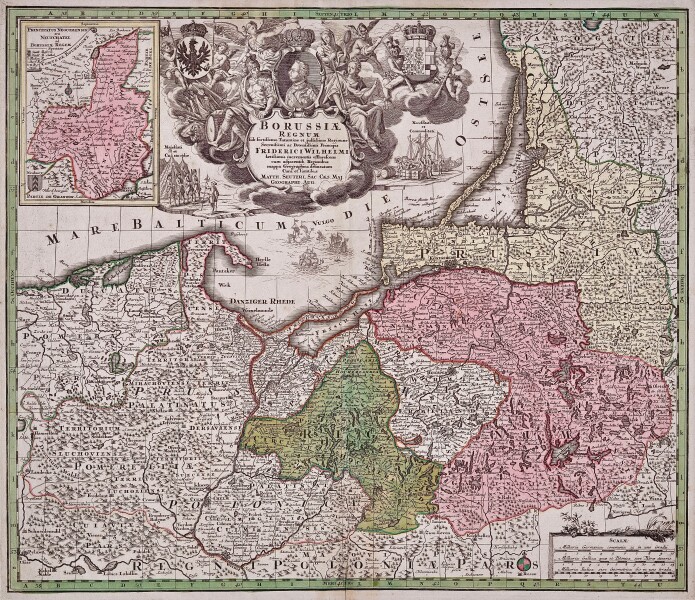 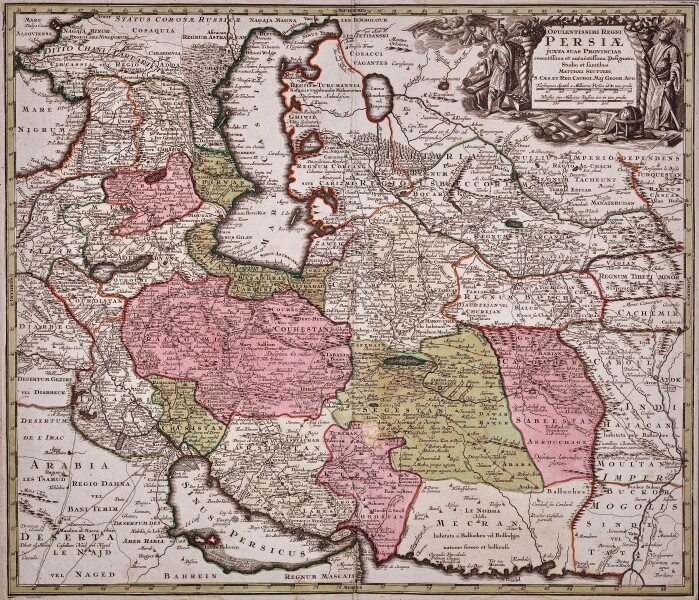 “Colossus Monarchic. Statua Danielis” (Colossal Kings) from 'Atlas Novus.Tabulae Geographicae’ by Matthaus Seutter the elder (1678-1757), Plate 1, 1728. One of the most interesting cartographic curiosities in Seutter`s famous series of large symbolic figures. Colossus, with sword and scepter, represents Daniel`s interpretation of King Nebuchadnezzar`s dream. The greatest empires in history are engraved on his breastplate. Oriental empires on the left leg and western ones listed on the right leg. Mythical animals also representing the great monarchies flank the figure.

Fantastic double page allegorical map of a colossus figure representing the great world empires as Daniel interpreted in Nebuchadnezzar's dream. Nebuchadnezzar was a powerful Babylonian king who conquered Judea during the sixth century B.C. The Book of Jeremiah calls Nebuchadnezzar the "destroyer of nations" (Jeremiah 4:7) and gives an account of the second siege of Jerusalem (587 BC) and the looting and destruction of the First Temple (Book of Jeremiah Jeremiah 39:1–10; 52:1–30).

Nebuchadnezzar is an important character in the Old Testament Book of Daniel.[8] Daniel 1 introduces Nebuchadnezzar as the king who takes Daniel and other Hebrew youths into captivity in Babylon, to be trained in "the learning and the tongue of the Chaldeans". In Nebuchadnezzar's second year, Daniel interprets the king's dream of a huge image as God's prediction of the rise and fall of world powers, starting with Nebuchadnezzar's kingdom (Daniel 2). Nebuchadnezzar twice admits the power of the God of the Hebrews: first after Yahweh saves three of Daniel's companions from a fiery furnace (Daniel 3) and secondly after Nebuchadnezzar himself suffers a humiliating period of madness, as Daniel predicted.

The plate depicts the four kingdoms as Assyrian, Persian, Greek, and Roman.

The warrior stands stolidly on the coast in martial gear with a scepter in his right hand. The monarchical successions of the world's major civilizations are listed on his armor and legs. He is surrounded by three mythical creatures and a bear who represent the greatest empires: Babylon, Persia, Greece and Rome. A scroll cartouche in the upper left lists the Roman gods in Latin. An identical scroll has been attached as a tab, with the same information in German.

Statua Regum Europaeorum P.C.N Nomina Continens shows a king, flanked on one side by crowns, sceptres, weapons, musical instruments, etc, and on the other by coats of arms. On his body and armor are listed the kings of the different European nations from the first to the seventeenth century, with their star signs and dates of their death. To the left are twelve large armorials or coats-of-arms, with Germany at top.

This fascinating print elequently captures the ethic of the absolute monarchy that prevailed across Europe well into the 18th-century. The scene is dominated by the strong figure of a king, adorned with his crown and sceptre.

Allegorically, the scene is meant to show that all of the power, and indeed the political identity, of almost all European states was vested in one man; the Absolute Monarch. While Seuttter's depiction is original in style, it follows a long line of anthropomorphic portrayals of power as invested in the body of the king. Perhaps the earliest such representation is Sebastian Munster's 'Lady Europa' (1540); depicting Europe embodied by a Queen, representing the Spanish Empire. Another evocative image can be found on the frontispiece of Thomas Hobbes' Leviathan (1651), which was created by the 17th century French master engraver/etcher Abraham Bosse. The image figuratively depicts the powers of all of a kingdom's subjects being subsumed to form the the body of a great kingly power.

A striking map of Spain and Portugal with a large decorative title cartouche depicting a king in all his glory, sitting beneath a canopy flanked by cherubs with an angel blowing one of two horns. He is being attended by his courtiers, while his adoring subjects cheer him.

The map includes Prussia, Pomerania, Polonica, Hockerlandia, Pomesania, Warmiaermelandia, Natanglensis, Galindia, Nandrovia, Sclavonia, and the Baltic Sea. The very large and elaborate cartouche includes 2 coats of arms, a crown, allegorical symbols, angels and cherubs, soldiers, with a portrait of Fredrich Wilheim in the center. A sea battle vignette is seen below the cartouche, a commercial port scene in the vignette on the right of the cartouche and a military dress review in the vignette to the left of the cartouche. There is a large inset of Neocomensis and Neufchatel in the upper left corner.

The map extends from the Black Sea to Kashmir, divided into kingdoms. It includes a decorative title cartouche in the upper right, which depicts a Persian merchant with carpets and other items on the left and an astronomer with his instruments on the right, each by a large cornucopia signifying wealth. Manuscripts, maps, a globe and scientific instruments are shown in the lower portion of the cartouche.

These colossi are cartographic curiosities as they were included along with two other images of colossal figures in Matthaus Seutter’s Atlas Novus published in 1728 and 1730. Four additional maps from this atlas are included in the exhibit because of their elaborate and artistic cartouches.

Matthaus Seutter the elder (1678-1757) was an engraver, globe maker and map publisher based in Augsburg, Germany. He apprenticed with Johann Baptist Homann in Nuremberg and was awarded the title of Imperial Geographer by Karl VI in 1731. By 1732, Seutter was one of the most prolific publishers of his time and was honored by the German Emperor Charles VI with the title of “Imperial Geographer”. He continued to publish until his death in 1757.

From the collection of Rich Breiman.